Sometime you just need a break

Even the most dedicated operator need a smoke break (I’m non-smoker btw). This is a small update of what I have been doing this last days. I have been busy working as a forklift driver during the summer and didn’t have time to edit the animations. Of course I want to work full-time as an animator, but as the same time the bills aren’t gonna pay by them self. I am stubborn when it comes to my choice of wanted profession, but not stupid!

Now I have more free time to actually polish and refine this animations. As you can see in this clip nothing is done yet, I started to edit this animation just recently. Challenge for this animations is Parent/Child constraints for the lighter and cigarette. Then of course the refining of the animations, clean some motions and keyframe the fingers.

Stay tuned for the complete animation.

This is SPARTA II !

More animations coming out, this time is two variants of melee animations. Unlike other melee animations in games, these animations involves more of the body when attacking, especially the second attack. Normally you will just see only the upper body moving when attacking the opponent with the rifle stock, which doesn’t add to much power to the blow. To really do some damage, you need to use the lower/rest of body for the attack.

Just like all boxing, or other form of martial arts, you just don’t stand straight and throw a punch. You need to have a good and well balanced stance to channel a punch into your opponent. If you have a poor stance, the impact will be less and it will also throw you of balance.

Of course, this applies to real life situation, in game we can ignore that. Depending of the game, some might not benefit a full-fledged melee animations like mine, such games like Call of Duty-series. Were everything is fast paced, all movement is quick and short. Mine animations would look awful in that particular game, they might need shorten the frames on my animations to make it go faster. But the animations will suffer for it. So in the end, it’s all depends on the creator of the game, how is the game supposed to feel, what kind of pacing do they want, how much abstract do they want from the real world and etc.

That’s all for now, I will soon start working some new animations, they are idle animations, one will involve different props = different constraints. Stay tuned for more animations.

Have been thinking, I am realllllllyy slow at updating and add more content to my reel. As I said on my previous post, I have experience some health and motivation issue. Instead of making a reel that contains 5-15 animations all the time, which also take long time before I can release any new material. Instead I will try to release some of them in separate small clips, I think more work will be done, no finished work waiting to be render out and I can publish more frequent on my website.

Once I released adequate with animations clips, I will compile them into one single reel and remove the “old” clips. By doing that my page won’t be so cluttered with animations videos, everything will look nice and tidy, and more easier to show my latest and best work. Because in the end, you need to show how awesome you at your profession.

Ok, I lied, more writing.
This animations contains lots of different constraints, from the left hand on handguard >> left hand on spare magazine >> spare magazine to the gun magwell >> left hand back to handguard. This took awhile to get it right, to let one constraint take over another constraints without the object, in this case the spare magazine, snapping into either the hand or the gun. I have used constraints before, but never that extensive such as this clip. The one I am used to is both hand holding the gun and occasionally one hand releases from the gun, but that’s it.

I have learned a lot editing this animations. Constraints aren’t that hard, you just need to remember where to lock and release the constraints, it’s all about finding the right frame.

Sorry for the long pause, I have been having some health issue (nothing major) and lack of motivations that made me more and less didn’t want to work on the animations for a period. I also have been busy with job hunting. But the reel is almost done, just double checking all the animations before I send it to 3ds Max for rendering. Stay tuned!

I am almost done with editing the animations, just some fine tuning of the motions and animate the fingers. The long Idle animation have taken LONGER than I expected. For some reason his shoulder, especially his forearms was experiencing the Parkinson disease!

They where stuttering almost the entire reel. I tried to fix it through FCurves, it fixed all the stutters, but his forearms couldn’t be fixed in FCurves. They in fact that made it worse and caused it to twist even more. After some experimented with different method, I found an unusually way to fix the problem by using the Pose Control. It’s quite hard to explain how I did it, explaining it would most likely cause me to trip on my own words badly.

I might need to make a video tutorial of some sort to show how I solved the problem. Heck, I might even need a video showing the problems first! That’s for a later post.

But now I almost have eliminated all stuttering on his forearm. There’s some small/micro stutter that’s visible when you SLOW it down to 1/4x of regular speed. I can either fix those, spending even more time, or ignore it and complete the overdue reel.

It’s all in the detail

I haven’t done any updates lately because I have been busy with job hunting. But at this moment I am working on the long Idle animations, but once that is done, I will able to make a reel of it and start working with other animations.
But I am not here to talk about it, my interest is in the animations on Battlefield 4™, more specifically, the cinematic animations. What concern me is the mesh clipping on certain objects, I am not saying the animations is bad, it’s awesomely good that I wish I could be a part of the development team. But from what I learned from my teacher, avoid as much mesh clipping when editing the animations. Of course even with all effort, some animations clipping is bound to happen when additive and procedural animations is used on the game characters. But on a CG sequences, it should’t be clipping, in my opinion, at least for a game such as Battlefield 4™.

Here’s a clip to demonstrate what I am talking about, start at 11 seconds mark.

If you look at Clayton Pakowski arms, the guy on the left side of the videos, you can clearly see both of his arms clipping into the LMG (light machine gun) pouches. That’s what really caught my attention. It’s not only him, other characters during the cinematic have mesh clipping that can be easily fixed.

Why does his arm clipping into that mesh? Why didn’t they correct it? Did they get sloppy? Didn’t have enough time? I probably will never now the true reason but I got some theories of my own.

1. They chose it leave it as it is. The battlefield-series have always been know for being a dedicated multiplayer games. They only introduced singelplayer options on the later installment. Even though they introduce singelplayer, they are always out shined by the multiplayer part. Since the multiplayer is their bread and butter, they might opted for cinematic animations not as SUPER important as the rest of the games. Doesn’t matter if the arm collide with the pouch, as long the motions look alright and good.

2. The animations team was working with a 3D character that wasn’t the final rendering of Pakwski (same as all other characters). It’s common practice during production that the animations team work with a mock up character that have the same height and body build as the finished product when editing, but when the final version of Pakwski was done, they might added/changed the exterior with additional pouches, hence why the arms clipping into the pouches.

3. Form before function. It might been are more artistically choice of not editing the arms correctly, well, at least some them. If you imagine how his arms would look like if it didn’t collide the pouch, he might look like the Hulk with his arms so wide. And from a silhouette stand point and first impression, he might look too bulky, heavy and slow if he had his arms in a “correct” position. If that’s the case, why didn’t the change the positions of the pouches so it won’t be under his armpits? Once again, maybe design before function

That’s all I can think for now, if I can think of more reason, I will edit this page. But as I said earlier, this is my opinion and my opinion only. This could be a load of crap and none of this I said is correct. But this at least makes me think about how the gaming industry works, how I should set my standard as an animator, what I can learn from it.

Anyway, thanks for reading this, hopefully it made you also think, or be more aware of the animations in games.

Yes, I have been watching Breaking Bad during the down time 😀

But on the positive side is now my main computer is alive! Had some hardware upgrade done to it, changed the motherboard, CPU, RAM and added a SSD.
Now I will be able to edit animations once again since the laptop didn’t stack up.

Well this ain’t my lucky day, my main working and gaming computer just broke down, it won’t even boot up too the BIOS screen. I tried different methods to conclude what’s broken and it appears to be my motherboard. Now I am reduced to my laptop, which is not even close to the stationary PC spec, with stock windows XP(!) and 4 years old.

I will continue to edit my animations, but things might take a little longer than usual.

But see this on the bright side, my computer need some major hardware upgrade anyway. It’s almost 4-5 years old with hardware such as:
Intel core 2 Quad
DDR2 memory
nForce 780i motherboard

The downside it will hurt my wallet to upgrade to today standards, don’t have a income yet, but hopefully soon. Until then, I will work with what I have.

A picture of what I have been editing, no video of it yet, but soon. Just one more animations left before I can make the reel and the last one will take a while. Since the last one is one long idle animations with some various motions that need to be edited. 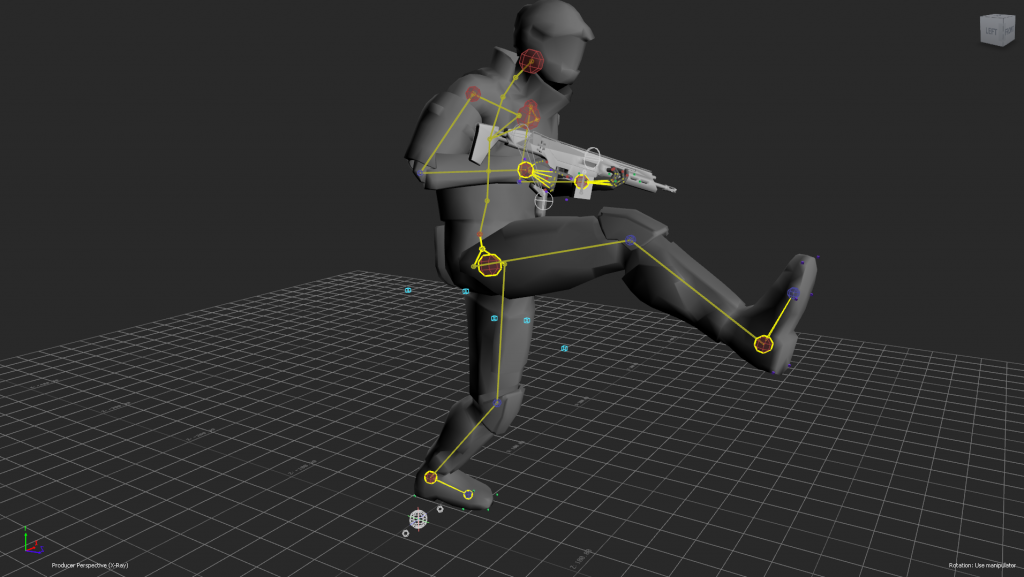 I don’t have any video or picture but the reload animation is almost done, need some tweaking on the hands/fingers. I still got 4 others animations that need to be edit before I can set it up as a reel, once those are done I will have a video of it. But one thing I noticed is the Constraints for the reloading animations when the character grab a new magazine is easier than I thought, as long as you know where to put the weights. If I screw it up, the magazine will “snap” onto instead being grab naturally, that happened at the beginning but was quickly fixed.

More details of my thought progress of editing the reload animations will soon come.